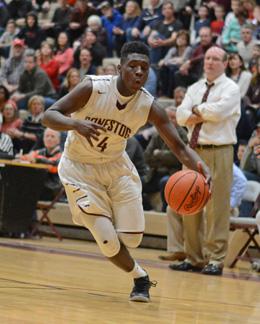 Milton Robinson (above) had a key 3-point play as Conestoga topped Penncrest in a battle atop the Central League. (Photo: Josh Verlin/CoBL)

Josh Verlin (@jmverlin)
—
One basket was all it took.
Conestoga was having some trouble with Penncrest in the fourth quarter of a showdown for first-place in the Central League, allowing the Lions to come from as many as 10 down in the fourth quarter to take a lead with three minutes to play
The Pioneers had gone cold, missing their first six shots of the crucial final period.’
And when Tyler Norwood seemingly took all the air out of the ‘Stoga gym with a pull-up jumper to put Penncrest up a point
Conestoga sophomore Milton Robinson delivered, with a driving baseline move that resulted in a 3-point play, a roar from the sizeable Pioneer Pit student section and the last lead change of the evening.
“I saw that the baseline was open, so I quick jab-stepped him to the right, and I knew I had the lane so I was going to go up strong regardless,” the 5-foot-10 sophomore said. “I knew I was going to get the foul because I felt him on my right side, so I threw it up and luckily I got the call.”
It was the only bucket of the fourth quarter for Conestoga. It was the only one the Pioneers needed, though they did go 9-for-9 from the foul line to close out the game.
Penncrest couldn’t come up with a timely response bucket down the stretch, as Conestoga took control of the Central League with a 52-47 victory.
With the win, ‘Stoga (13-2, 10-0) moves into sole possession of first place, a game ahead of the previously-unbeaten Lions (13-3, 9-1).
“We knew that this would really help us for the rest of the year, taking first place,” senior guard Scott Shapiro said. “We still have to go through a ton of Central League games and they’re going to be tough games, so just onto the next one.”
Shapiro led Conestoga with 17 points, hitting all four shots he took in the first half, including a pair of 3-pointers, to help the Pioneers out to a nine-point advantage at the midway point.
Senior wing Charlie Martin and sophomore Zach Lezanic added 10 points each for Conestoga.
Though Shapiro missed his first four shots of the third quarter, he ended up with the ball in his hands at the end of the period, hitting a pull-up 3-pointer from the left wing to put Conestoga up 41-32 heading into the final eight minutes.
“I think Charlie or someone faded to the corner, I looked there, I looked at the clock and there were like three seconds [left],” he said, “so I pulled up and it was good.” Tyler Norwood (above) had 26 points to lead all scorers. (Photo: Josh Verlin/CoBL)

Led by Norwood and senior Justin Ross, Penncrest mounted a comeback. A Norwood left-handed drive was followed by a Ross 3-pointer off a Norwood feed, closing the gap to three with 3:52 left.
Senior forward Mike Mallon followed that with a steal, finding Norwood in transition to cut the lead to one. After Conestoga missed another shot, Norwood gave Penncrest its first and only lead of the game before Robinson answered.
Penncrest had another chance to go ahead after a Norwood layup and offensive foul on Conestoga gave the Lions the ball with 30 seconds to play down two, but they couldn’t connect on a 3-pointer. Two Shapiro shots pushed the lead to four, and after another empty possession, Robinson knocked down two more freebies.
Norwood, Penncrest’s star junior guard, led all scorers with 26 points, though he certainly had to work for it. Conestoga routinely double-teamed the 5-11 Norwood, forcing him to constantly dribble out of traps and around defenders to get his shot off.
He certainly never gave up, either, hitting a 3-pointer with five seconds left to cut it to 50-47 before two foul shots from Lezanic sealed the win.
“Norwood’s a very good player, and I thought that we stepped up enough times that he had enough misses,” Troy said. “You pay so much attention to Norwood, and everybody else takes advantage of that. I thought we did a good job on Norwood, but we also did a good job of addressing everybody else.”
The Lions still have a few tough games ahead, beginning with a trip to Strath Haven next Tuesday; Mike Doyle‘s squad also gets Lower Merion at home on Jan. 31 and also plays Harriton, Radnor, Springfield and Marple-Newton.
Conestoga has already beaten the league’s third and fourth-place teams, Lower Merion and Strath Haven, once this season. They’ll have to get through the Aces one more time, at home next Friday — that and a Feb. 7 game against Haverford HS are the Pioneers’ only two home league games remaining.
They also will play road games at Ridley, Springfield (Delco.), Upper Darby and Garnet Valley, none of whom will go down easily.
If they can do that, an automatic bid in the league’s championship game awaits.
“Before we started the season, that’s one of our goals, try to go undefeated in the Central League,” Shapiro said. “We got off to a hot start and we knew this was going to be one of our toughest games for the rest of the year, we knew we just had to come out and bring our ‘A’ game.”