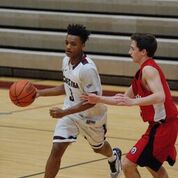 Conestoga got a basket from Ronan Mayock in the first quarter, but that was all she wrote and the Pioneers trailed 7-2 after one.
The second quarter featured 5 points from Scott Martin, but Penncrest went on a 16-5 run as turnovers plagued the Pioneers, and Stoga trailed 26-14 at the half.
Shane Scott hit a couple of baskets in the lane in the third quarter, and Truth Ingram scored on a put back, but Penncrest was up 39-26 at the end of three.
Wes Brace went 4-4 from the line for Stoga in the fourth quarter, but it was not enough as Penncrest went on to win the game 50-40.
.