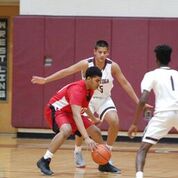 The JV team improved to 4-2 a day after Christmas with a solid 53-41 team effort over Central Bucks West. Stoga got off to a good start in the first quarter as Scott Martin opened the quarter with a couple of baskets, and then Miles Scott got a steal and an assist to Wes Brace. Brooks Rush then fed Myles for two, and was on the receiving end of an assist from Connor Steele, and Stoga led, 15-8 after one.
CB West came storming back at the start of the second quarter, and despite some nice rebounding and defensive play from Truth Ingram, it was Conestoga hanging on to a fragile 25-23 lead at the half.
The complexion of the game changed again at the end of the third quarter when Conestoga went on a 6-0 run, making it 39-32 Stoga at the end of three.
That same run continued for Stoga at the start of the fourth quarter as the Pioneers scored 8 more consecutive points, including two baskets from Gautam Rao, the second of which came on a nice feed from Jacob Bierstaker. Next up for the JV squad is CB South tomorrow.