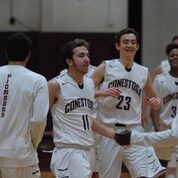 After a slow start, Conestoga roared past the visiting Haverford Fords 65-50 in an important Central League matchup on SENIOR NIGHT!  7 Conestoga Pioneer Seniors were honored before the game and were later recognized by Coach Troy.  This Senior Class of 2017 could go down as the 4-year class with the most wins in Conestoga High School history.    After the ceremony, the ball game started and Haverford had upset on their minds.
Stoga was down 8-12 after the first period despite 4 points and 4 rebounds from Senior starter Michael Dutot.  In the second quarter Senior co-captain Charlie Martin heated up with 8 of his Stoga career high 26 points to keep the game close at half 20-22.  In the third quarter, it was more of Charlie Martin (26 pts, 5 reb, 1 ast) and his side-kick Senior co-captain Scott Shapiro (10 pts, 6 reb, 4 ast).  The duo accounted for all of Stoga’s 24 points in the quarter and Martin hit three consecutive 3-point FGs late in the quarter to send the Pioneer Pit and the home crowd into delirium.
In the final quarter, seven different Pioneers scored to keep the Fords at a distance.  All seven seniors, long-time teammates and friends, Co-Captain Angus Mayock, Co-Captain Scott Shapiro, Co-Captain Charlie Martin, Scott Lambert, Will Marshall, Blaise Milanek and Michael Dutot exited the game individually to a rousing standing ovation. Conestoga has one more important and pivotal league game Friday Night at Garnett Valley at 5:30PM.