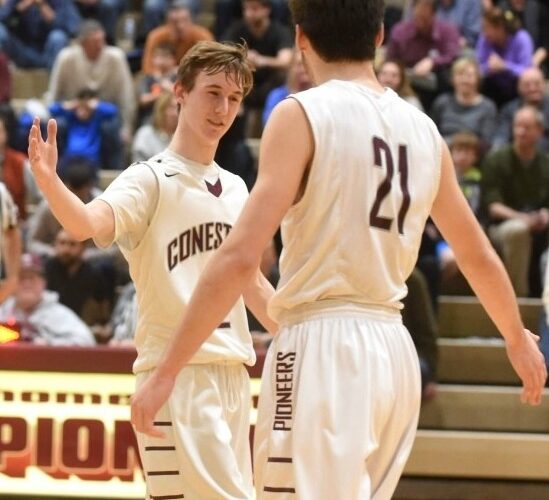 Conestoga boys varsity basketball team put on another show at home for the fans at Conestoga High School.   In a pivotal District 1 playoff game, where the winner not only advanced to the District quarter-finals, but also secured a spot in the State Championship playoffs, and playing arch rival Lower Merion for the third time this year (a Stoga OT win at L.M. and an Aces 2-point win at CHS), this game set up to be an instant classic.   Everyone in the gym was anticipating another close game, possibly down to the last possession, but the Stoga team had other ideas.  The Pioneers consistently and flawlessly broke down the Aces’ full course press, executed their inside-outside game, and flat-out out-worked and out-hustled the Central League tournament champion Lower Merion team, and the pioneers won big 77 to 57!

It was raining “threes” from the tip off as senior captains Charlie Martin (25 pts, 4 reb, 1 ast), Scott Shapiro (11pts, 4 reb, 5 ast), and Angus Mayock (17 pts, 5 reb, 2 ast) combined for five 3-point field goals in the first half building a 15-10 first quarter lead to 35-28 at the half.  Any ideas that Lower Merion had to reduce the lead in the second half was quickly diminished by an early Zach Lezanic (9 pts, 3 ast) “three” and more Martin “threes” including one that built the lead to 43-30 and rocked the Pioneer Pit into a roar.  The inside game of Mayock and Milton Robinson (13 pts (including 7-8 from the free throw line), 2 reb, 4 ast) added to the Lower Merion frustration and built the lead to 59-42 at the end of three quarters.    As the saying goes, “It was all over but the noise.”  A balanced scoring and rebound commanding fourth quarter gave little chance for the Aces to comeback.  Stoga once again played a great game at home.