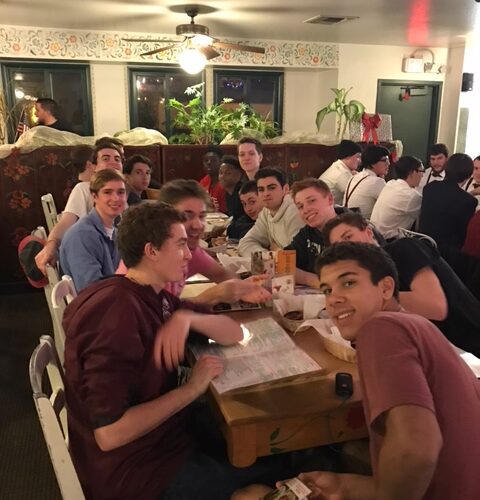 Stoga overcame a 14 pt deficit at half to close the gap to 54-55 in the team’s first loss against a very tough Camas H.S. team from Washington state. Zach Lezanic’s 3 pt shooting helped keep Stoga in the game early on and they found themselves trailing 10-16 after one quarter. Scott Shapiro and Angus Mayock got going on offense in the 2nd, but a late 8-0 run by Camas had them up at the half 19-33.
Stoga began their comeback in the third as Charlie Martin hit a couple of 3’s and Angus began controlling the paint scoring 8 of his team high 18 pts. The teams traded baskets early in the 4th and then Stoga found themselves down by 9 with 1:30 left. No quit in this team as they mounted a furious rally with pressure defense and some timely shooting to bring them within 53-55. Stoga had a chance to tie with 2 sec. left but was only able to convert 1 of 2 free throws.
Final scoring: Martin 9, Lezanic 10, Shapiro 17, and Mayock 18. They play the home team Scripps Ranch H.S. on Friday, December 30 for the 3rd place title.